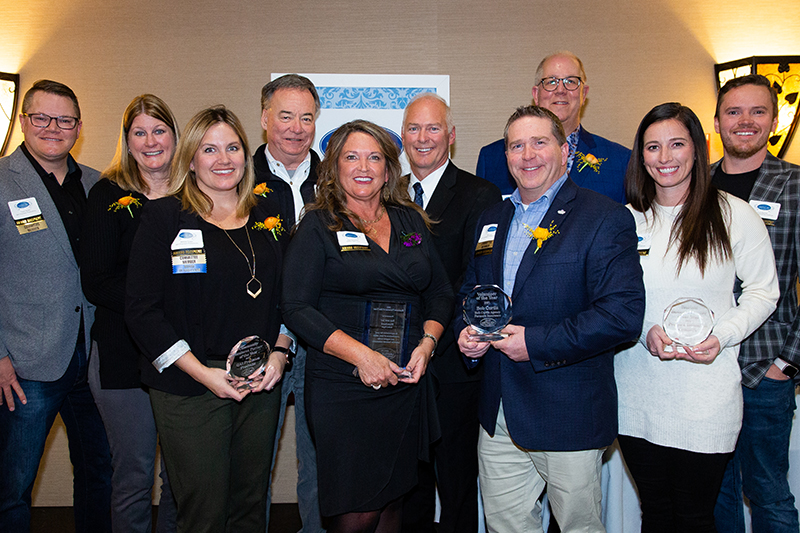 The Lakeville Area Chamber of Commerce announces Sue and Jay Blanchard, owners of Safety Signs, as the 2021 Businesspersons of the Year. Now in its 32nd year, the Businessperson of the Year award accepts nominations from the community during the year and the recipient(s) is selected by a committee of former honorees.

If you are not sure if you have heard of Safety Signs, look at the back of the traffic signs or safety barriers the next time you are driving in or near a construction zone. Chances are it has Safety Signs stenciled on the back or bottom. Since 1993 Safety Signs has been bringing their “Whatever it Takes” attitude to job sites all over the region. This “no problem, we will take care of it” dedication and commitment to safety and customer service has allowed Safety Signs to continue to grow and exceed expectations for 30 years.

Now, when you hear about Safety Signs success and all that owners, and high school sweethearts, Sue and Jay Blanchard have been involved in and with over the years you would assume they are two very outgoing and extraverted people. Growing up Jay participated in soccer, track, and was part of the 1982 state champion swim team, while Sue played tennis and was homecoming queen. Together, they were both on student council, and graduated from St. Cloud State. However, when you talk with the two of them, they both say they were pretty quiet – unless they had a purpose that is. And to say they have found purpose is an understatement.

Jay’s path to success was multi-faceted. He learned the value of hard work, responsibility, and adulting at a young age, as his family was always fostering no less than 5-10 kids. He recalls times when he needed to be at school and was watching over a younger child in the household so he would just bring them to school with him. He had several jobs throughout school, most dealing with hands-on, skilled tasks. After college he worked in commercial real estate for a time and when he decided to go into business for himself, he researched all kinds of businesses to start. The Blanchard’s looked at many concepts including car washes and popcorn stands but ended up starting their first business, Chem Seal, an asphalt maintenance company. This was his first business. Later he started St Nick’s Chimney Sweeps and it wasn’t until 1993 when Safety Signs was incorporated. So, they could just as easily be celebrating the most successful popcorn stand in Lakeville here today – yes that was an option!

The Blanchard’s and Jay’s mom, Nancy, knowing they wanted something multi-generational, eventually settled on traffic control and building their business in this area. They started Safety Signs on the very property it sits on today – the frontage road visible from I-35, between 185th and County Rd 70. With only a small trailer, borrowing employees from the asphalt maintenance company that they had previously started, and renting trucks from their customers, Safety Signs was up and running. Nancy answered the phones and took care of the day-to-day administrative duties. Sue worked evenings and weekends to cover the financial duties. And Jay was the boots on the ground salesman and contractor. Jay grins when he recalls that their insurance expense in the first year of business was five-hundred dollars more than their revenue for the year.

After graduation from college, Sue passed all four parts of the CPA exam on her first attempt. She enjoyed a successful career in public accounting working for a local firm for nine years as a Certified Public Accountant specializing in audit and tax. However, as Safety Signs continued to grow, it became clear that the company needed her full time. So, in 1996, she left her accounting firm and started full-time with Safety Signs. All of Sue and Jay’s three children “grew up” at Safety Signs, enjoying their time with grandma right there as well. As the kids got older, all three worked at Safety Signs in some capacity. Their son, Jake, continues to work there on the real estate side of their business.

As Safety Signs continued to grow and expand, the Blanchard’s have reinvested time back into their industry and the Lakeville Community. Sue currently serves on the Lakeville Area Art Center Board of Directors and on the Association of General Contractors Minnesota Board of Directors. She has also served on the board of directors and is Past President for several other non-profit associations including the Minnesota Surveyor and Engineers Association, the Association of Woman Contractors and Lakeville’s own, Pan-O-Prog. Jay is past President of the American Traffic Safety Services Association (ATSSA) Northland Chapter and served on the Board of Directors for both the Minnesota GuideStar Intelligent Transportation Systems and the ATSSA National. Together they received the Chamber’s Community Business Partner of the Year award in 2016 and both have also been recognized as Lakeville North’s Distinguished Alumni.

Sue and Jay’s philanthropy has touched so many organizations in and around our community. Some that are particularly close to home for the Chamber are supporting the Lakeville Public Safety Foundation Lights & Sirens Golf Tournament and the Chamber Foundation’s Suds for Scholars fundraising events – serving as a long-time presenting sponsor for both. Safety Signs is also one of the founding donors of the Chamber’s Lakeville Works workforce initiative – developed to create awareness of in-demand careers in our community.

The Blanchard’s generosity has been recognized locally and nationally over the past couple years – first in the fall of 2019 when then Vice President, Mike Pence, visited Safety Signs to recognize their work as a small business and how important they are to our economy. In spring of 2021 we learned that the new aquatic center addition on Century Middle School will be named after the Blanchard’s in recognition of the sizable donation they made to bring this long-standing dream a reality in our community. One that will bring guests from all over to eat in our restaurants, shop in our stores and support the local Lakeville economy.

Jay and Sue are the perfect mix for a successful partnership team. Jay is the visionary, the entrepreneur, the risk taker. Sue is structured, detail-oriented, and makes sure it is a fiscally responsible plan of action. Neither seems interested in slowing down anytime soon. They continue to innovate and develop divisions that will support their customers’ traffic safety projects from cradle to grave.

When asked about what they would like their legacy to be, Sue and Jay are very simple in their response – they want to create a place for people to enjoy what they do, a place for friends and their kids to work and a place that works tirelessly to make sure the public and industry workers get home safe to their families every day. To quote Jay, “You work hard, take care of your people, and realize that the more you give away the more you seem to get”.

About Safety Signs:
Safety Signs, a family-owned business, prides themselves on a multitude of offerings and years of experience. They specialize in consulting, planning, and designing solutions for all Traffic Control related aspects of a project or event and are committed to providing exceptional service and ensuring Safety every step of the way. Safety and Service are the most important aspects of their industry, and their commitment is to provide you with the highest quality of both.

About the Chamber:
The Lakeville Area Chamber of Commerce and Tourism is a non-profit corporation that has represented the interests of the local business community for over 70 years. Our mission is to serve as the advocate, resource and leader for our members and the entire Lakeville business community.

The Chamber is a vehicle through which professionals can work for the common good of the Lakeville community. Our members know that by working together, we can improve the business climate, recruit and retain businesses, attract visitors to the area, and influence legislation that supports these goals.